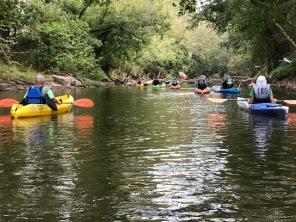 A large group of enthusiastic hikers joined us for our first annual First Day Hike on Wednesday, January 1 at 11:00 a.m. Two hikes were available: a wildlife hike led by DNR wildlife expert Art Shomo and a nature, stream ecology and Coal River history hike led by Master Naturalist Diana Green. Cloudy skies quickly cleared and it was a beautiful, cool day for a walk in the woods.

Hot chocolate, mulled cider and home baked cookies were available after the hike, plus  a warming area with patio fireplaces. Thanks to our wonderful volunteers who helped make January 1 a memorable day.

The trip leaders stopped along the stream to explain the stream ecosystem and its history, as well as the history of the settlers who once lived by the river. Stream restoration past and future was described by trip leader Dennis Stottlemyer. Upon reaching the confluence of the Big and Little Coal Rivers, he led the group upstream to the location of a historic sunken barge, which was visible at the low water level.

Participants also learned about the recent increases in the number and diversity of fish in the river as a result of water quality improvements.

Along the way there were several sightings of birds that depend on the river such as osprey and wood ducks.

Paddlers ended the float trip at the site of Lock 4 and enjoyed a tailgate picnic before returning to the Forks of Coal.

A special nature and Coal River history hike on the Forks of Coal trails was led by   renowned local naturalist DOUG WOOD on Saturday, October 5. It was a beautiful, cool morning and the hikers took off on the Blue Trail, which leads up the ridge to the top of the hill overlooking Big Coal River.

Doug introduced the group to various kinds of wildflowers and edible plants, and explained the history of the area, including the various Native American tribes that frequented Coal River. He did a great job of describing the forest ecosystem and the animals that live in the area of the Forks of Coal.

A special treat was the viewing of the recently planted wildflowers in the open area at the beginning of the Orange Trail. The area had been used to relocate earth moved during the construction of the Natural Area’s new entrance and was re-seeded this summer with native grasses and flowers. Due to the drought, much of the seed had not yet germinated, but bright pink and white cosmos were in full bloom and Monarchs and other butterflies were flying around among the flowers in the bright sun.

Join the Foundation today and get a free subscription to our informative and entertaining newsletter.

Click here to provide a tax-deductible donation to the Forks of Coal Foundation.